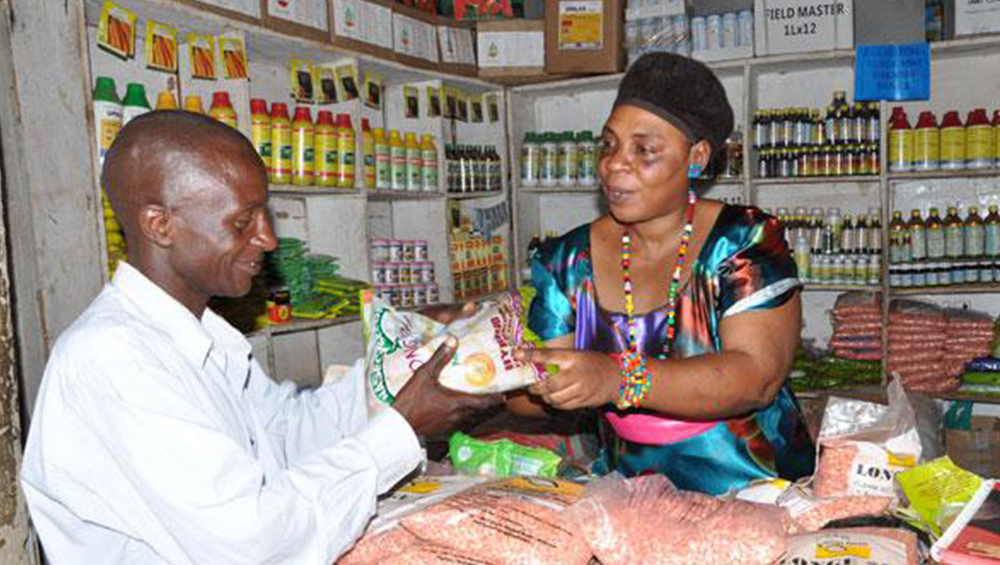 “It was much later that I realised the ‘chemical’ was not effective. When I contacted the dealer, that is when we noticed the seals on the packages had been altered. They were different from the original ones.” Counterfeit products are more common on the market than the genuine ones. Abbey Kazibwe, director, Nsanja Agrochemical Ltd, states that there are no regulations in place that bar the entry of counterfeits into the market.

“A regulatory Bill was drafted but it has not been passed by Parliament,” he says. “However, we are glad that at least Uganda National Bureau of Standards (UNBS) is considering pre-shipment inspection at the source since some of these products are imported.”

Reality is different
Pre-shipment inspection can deal with sub-standard imports but many counterfeit products are made from within the country. For instance, Mancozeb, a very effective pesticide, is targeted most because of its high market value. However, this is not to say that other chemicals are not targeted, as well. The counterfeiters go to the farmers and buy back empty containers and fill them with their own concoctions. A case in point is used bottles of Round-all, a common herbicide. Instead of this, the bottles are filled with used engine oil, sealed and placed on the market, at a very low cost, to compete with the genuine drug. Ideally, every agrochemical should be registered, tested and certified by Ministry of Agriculture, Animal Industry and Fisheries but the reality is different. Dealers are now advising their clients to either pierce or damage, in some way, the empty containers after use, or refuse to sell them to ‘recyclers’.

Precautionary measures
Perhaps the most depressing effect of counterfeit agro-chemicals is that they undercut the profit margin of the farmer. A lot of money is spent on buying the drugs and yet the quality of the harvest is poor. The wrong chemicals, in the form of sub-standard or adulterated products, will also damage the environment. David Evans Ssejjombwe, an agronomist at MTK Uganda Ltd, advises that the farmer’s safest option is to identify the constant factors that characterise genuine importers and stick with them.

Our stickers are factory-made and engraved on the bottles and packages, unlike those who recycle empty bottles,” he points out. They glue their stickers to the bottles. Besides, we always hold quarterly seminars in the four regions of the country to introduce farmers to our dealers.

Besides holding classes every week to sensitise their clients on their products, Kazibwe also encourages farmers to buy and transport the drugs themselves. This is because couriers may be tempted to exchange the original product for the fake one. “Low prices should not be the main criteria that farmers use when buying agro-chemicals; they should also consider checking the bottles for the special engravements that we place on them.” Genuine dealers ensure that they offer after-sales services to their clients to ensure that their products are properly used for the best results.

Application
The key to successful application lies in the proper diagnosis of the problem and right mixing of the chemicals to combat the problem. Too much will kill the crop while too little will not treat the problem. All chemicals have a pre-harvest period; this is the amount of time between the application and the harvest. Observance of the pre-harvest period allows the drug time to disintegrate so that the consumer is not exposed to risk. The more common herbicides include Round-all and Noweed. The latter is non-selective chemical that kills all types of weeds. “Usually, it is used to clear fields and when applied correctly, it will save the farmer payment for the labour hired to do the job,” says Ssejjombwe. “On the other hand, Round-all is a selective herbicide which kills only broad-leafed weeds but will not affect grasses,” he adds. For the former, the mix ratio is 200 millimetres to 20 litres of water, while 50 millimetres to 20 litres of water will do for the latter. When dealing with insecticides, it is worth noting that most pests are found under the leaves. However, insecticides like Cypercrop have vapour action that will kill the pest on top of the leaf as well. This is a contact insecticide that does not penetrate the plant system and it should be used only after transplanting.
Other types include Jackpot-Lambdacy Halothrin, Maximum Imidacaclprid and Dimetocrop, which are penetrative insecticides that work from within to kill sucking pests like fruit flies and aphids. Their pre-harvest interval is 14 days. Fungicides like Milor and Volar MZ treat fungal diseases in vegetables. Milor, which contains Mancozeb, as the active ingredient, contains a penetrative curative molecule for downy mildew, early and late blight in tomatoes and other vegetables. The mix ratio is 50 grammes to 20 litres of water; the pre-harvest interval is 21 days.

Soil testing
While the use of agro-chemicals on the plants is important, Kazibwe also urges farmers to test their soil before planting.
“We send our farmers to Kawanda Agricultural Research Station with soil samples so that they can know the nutrients lacking and to stabilise the pH system,” he says.
Before planting, nursery beds should be fertilised with lime in small portions. Nutrients like diammonium phosphate (DAP), which encourage root growth, should not be placed at the base of the plant. “When DAP disintegrates, it gives off heat which will scorch the plant. Instead, it should be mixed, in small quantities, with the soil.”
Calcium ammonium nitrate (CAN) and NPK complex (17-17-17) can be applied to the plant after two weeks to increase plant size and steady the plant.
Ssejjombwe encourages the use of Vegimax, an organic fertiliser containing trace minerals, vitamins and amino acids produced from plant products, to boost leaf and shoot growth. This should be applied when the seedling has developed at least three leaves. However, usage should be stopped prior to flowering.

Greenhouse alternative
There are alternatives to cut down on use of agro-chemicals. One of them is greenhouse farming, which involves plants being grown in a controlled environment. In a greenhouse, there are fewer attacks from pests and diseases. “The screens filter the air and with limited attacks, the farmer greatly reduces the amount of pesticides used,” Kazibwe notes.
Temperature, light and shade are key factors that can be controlled by the farmer in a greenhouse. Material for construction of the houses can be imported; however, small-scale farmers can use locally available materials at low cost. From pine trees, one can make the wooden poles and only import the plastic covering and drip pipes. Drip pipes are a must since the plants do not have direct access to rain water. Greenhouses are especially useful in the growing of vegetables and crops that do not have a long maturity period. However, the soil must be fertilised before planting can occur.

Difference between pesticides, herbidices and insecticides

The primary difference between pesticide and herbicide is that a pesticide is used to kill or repel pests of all types, including insects and occasionally plants. A herbicide is designed to kill certain types of plants, such as weeds. Pesticide is a fairly broad term because many different types of products, including herbicides, fall under this classification. Any product designed to deal with some sort of pest, including rodents and plants, could be considered a pesticide. Herbicide is normally used only to describe products designed for killing or controlling troublesome plants. Both types of products can be either chemical-based or made with natural ingredients. Pesticides are used to control bugs, weeds, and rodents as well as fungus and algae. Not all pesticides will control all types of pests, and people normally have to seek specific types for their individual pest problems. Herbicides, which are generally used to control unwanted plant growth, are typically available in either selective or non-selective forms.

Selective herbicides either kill or control a specific type or types of plants. They might be more desirable to get rid of certain plants without harming the desired plants.
Non-selective herbicides generally kill any types of plants they come in contact with. Both selective and non-selective herbicides are considered forms of pesticides.
Pesticide and herbicide exposure can be potentially harmful or even deadly to humans. There are some types of pesticides and herbicides that are not chemical-based. Some examples of ingredients often used in natural varieties of pesticides and herbicides include neem, garlic and soap. Even though the natural products are considered safer to use, they could still cause some irritation on contact, particularly in people who have allergies to the ingredients, and they might also require frequent applications because they are usually not as strong as the chemical-based products.